Europe is home to some of the world’s most talented and exquisite footballers. For the longest time, it has been the financial and sporting epicenter of global football. Footballers are no longer just athletes; they are icons, role models, and influencers.

Because of the elevated status that football professionals enjoy, many young people have taken up the game at a young age and developed a desire to be the best. This season, as in previous years, some very young football players have been promoted to the senior level and signed their first professional contracts.

It is an opportunity for them to train with their idols and observe what it takes to make it big in a very encouraging move. The earlier exemplary professionals’ personalities and work ethic rub off on up-and-coming, promising talent, the better.

Many such youngsters in Europe’s top five leagues have nailed it with hard work and successfully entered the big stage. Many of them have already knocked on the first team’s door, and others have taken positive baby steps. On that note, here are the five most promising young players in Europe right now:

Bayer Leverkusen has been fortunate in the past to reap the benefits of giving their young guns first-team opportunities. For example, Kai Havertz and Florian Wirtz have emerged as great future prospects for Germany and are highly valued in the market. Continuing the trend, Leverkusen allowed Iker Bravo to become the Bundesliga’s third-youngest player.

The Spaniard made his debut against Hertha Berlin, drawing 1-1. In the 79th minute, he came off the bench. Bravo is a center-forward who previously played for Barcelona’s La Masia youth system. Last season, the Spanish giants were unable to reach an agreement with their starlet on a professional contract.

After joining the Bundesliga club, the young Spaniard has put in some impressive performances for the U19 squad. Bravo is widely regarded as having the potential to be a top player, and Barcelona let a very talented youngster slip through their ranks. Keep an eye out for him!

Luka Romero, an Argentine wunderkind, is the only player from Italy’s Serie A on this list. Lazio has a reputation for making low-risk, high-reward transfers, having previously signed Lucas Leiva, Ciro Immobile, Francesco Acerbi, and others. Romero is a member of the same breed, and early indications of his talent have been impressive.

The Italian club signed him from La Liga RCD Mallorca for a training fee. Last season, Lazio had the oldest squad in Serie A, and this is a positive step for a club looking to secure its future. Romero made history in 2019-20 when he became the youngest player in La Liga. He did it against Real Madrid at the age of 15 years and 219 days.

The Argentine has been compared to greats of the game, such as David Silva and Lionel Messi. The 16-year-old is well-known for his dribbling abilities and can easily take on players one-on-one. The attacking midfielder with a left foot has a lot of potentials, and it would be Lazio’s responsibility to help develop his raw talent.

Bayer Leverkusen gave Zidan Sertdemir his debut in the same game in which Iker Bravo came on as a substitute. Even though he only played for four minutes, he became the second-youngest player ever to appear in a Bundesliga game.

The Dane is primarily a central midfielder, but he frequently moves higher up the field. He prefers to be involved in the final third, as evidenced by his performances for Leverkusen’s U-19 team in Germany.

In ten games for Bayer Leverkusen’s junior division, he has six goals and two assists. Sertdemir chose to represent Denmark on the international stage despite his Turkish roots. He was a member of FC Nordsjaelland’s youth setup before joining Leverkusen.

Youssoufa Moukoko made his long-awaited debut last year after making a lot of noise due to his “beyond the age” performances with Borussia Dortmund’s U17 and U19 teams. In November 2020, he came off the bench in Dortmund’s 5-2 victory over Hertha Berlin. 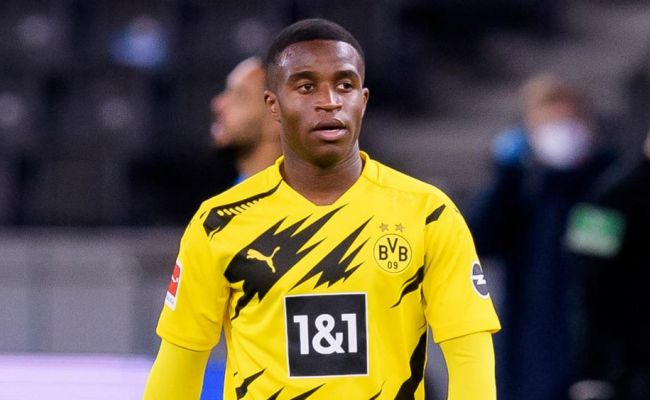 Moukoko became the Bundesliga’s youngest player ever after that appearance. The hype surrounding Dortmund’s wunderkind is completely justified, and his statistics will astound anyone. He scored 90 goals in 56 games at the U17 level. What’s more, Moukoko began playing for the U19s when he was only 14 years old.

The German has 34 goals in 20 U19 games for Dortmund, and everything he does on the field is incredible. He is quick, and clinical in his finishing, and his attacking instincts are impressive for his age. Nike has already agreed to a £9 million deal with the adolescent!

After scoring against Union Berlin in December 2020, he became the Bundesliga’s youngest scorer. He appeared in 14 games and scored three goals in 2020-21. In his 20 Bundesliga appearances for Dortmund, he has started three times and come off the bench 17 times.

Mathys Tel of Stade Rennais is the youngest player in all five of Europe’s top leagues. Tel’s first professional contract was presented to him by the Ligue 1 club, which takes great care of their young talent. In August, he came on as a substitute against Brest to become the 11th youngest player to appear in France’s top flight.

The club has high hopes for the young winger and has already given him three substitute appearances in Ligue 1 and two in the Conference League. Tel has even been a box-to-box midfielder and an out-and-out striker in his youth career.

The French teenager has demonstrated a desire to excel on the biggest stage, and he will hope to carry the momentum from these games into Ligue 1.

Read More
SSPORTS
Originally, the role of a full-back in a football team was to defend wingers and cover wide areas.…

Read More
SSPORTS
Real Madrid is arguably one of the most powerful football clubs in the world today, a position they’ve…

Read More
SSPORTS
World-class strikers are difficult to come by. Goals win games, and having a player who is a constant…

Read More
SSPORTS
Nike, a multinational corporation based in the United States, is the world’s largest supplier of sporting goods. Nike,…